What are the three relevant functions and principles of fruit tree insect-proof nets?

1. The anti-insect effect of the anti-insect net
Covered during the whole growth period of fruit trees, adult pests cannot fly. Fruit trees cultivated in summer can basically avoid various pests such as cabbage caterpillar, diamondback moth, cabbage armyworm, prodenia litura, yellow beetle, ape leaf insect, aphids, etc. Harm.
2. Disease prevention function of insect-proof net
The disease prevention effect of the fruit tree insect screen is mainly reflected in effectively inhibiting the invasion of pests, while cutting off the transmission route of the virus, reducing the occurrence and harm of virus-transmitting insects, and the ventilation of the insect screen is good, and it also inhibits some bacteria to a certain extent. Sexual and fungal diseases occur. Viral diseases are catastrophic diseases on many fruit trees, mainly spread by insects, especially aphids. Because the insect-proof net cuts off the main way of transmitting the virus, the virus infection is greatly reduced.
3. Insect net's shading and cooling effect
Excessive sunlight will have a negative effect on fruit trees, speed up metabolism, and accelerate decline. After the insect screen is covered, it can block part of the light, so that the crop can get the best light intensity required for photosynthesis. Generally, the shading rate of white insect nets is 15%-20%, and the white insect nets have the function of scattering light when light passes through, making the light in the net more uniform, and reducing the lack of light on the lower leaves caused by the blocking of the upper branches and leaves of the fruit tree. This phenomenon improves the utilization rate of light. At the same time, covering the insect net can raise the temperature of the ground surface 10cm in the shed in the morning and evening, promote the growth of the root system and the absorption of nutrient elements, and reduce the ground temperature at noon, so as to prevent the roots from being damaged by excessively high ground temperature.
4. The anti-disaster effect of the anti-insect net
Fruit tree insect-proof nets are made of high mechanical strength. Rainstorms or hail fall on the nets, and then enter the nets after impact. The impulse is buffered, thereby effectively reducing the impact of heavy rains, storms and other disasters on crops. At the same time, the insect-proof net also has a certain anti-freezing effect.
5. Insect nets save labor and save money
Although the shading effect of the sunshade net in production is good, it is not suitable to cover the whole process due to too much shading. It needs to be covered at noon after the sunshade is lifted or covered during the day and night, or when it is covered under the sun. The management is more labor-intensive. Insect nets provide less shading and can cover the whole process. Once used to the end, management will save labor. After the application of the anti-insect net, the fruit trees can be completely free of insecticides during the whole growth period, which can control the pollution of insecticides and save the labor of pesticides and spraying. 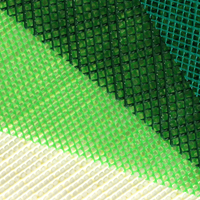 PREV: What are the methods for identifying the quality of vegetable net bags?      NEXT: What are the functional advantages of the flexible protective net?